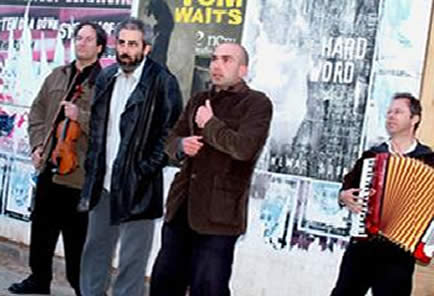 or Online Tickets via www.melbournefringe.com.au

Ghostly dark comedy, brilliantly observed frailties and the close proximity of love and violence grating; this is the world of Russian Soup.  It isn't possible to have a laugh without a last gasp or to trust that hypocrisy won't flower in the most upright citizen. And it isn't even sure that it will all end. 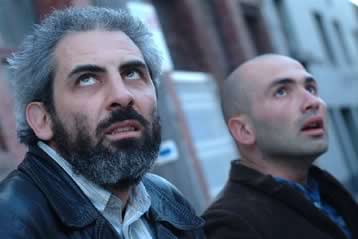 “Only just over an hour, these brilliant distillations explore the nuances of Russian drama and humour - catch it if you can.”
Mary Lou Jelbart on the John Faine show

“The timing, the acting, the stage use and the music, especially the music! made it such a great experience.”
Bronia Kornhauser, Jewish Music Archives Monash University

“A delicious entrée to further reading of the short stories of three giants of Russian literature… pregnant with humanity…..engaging and affectionate production…(with) irony, satire and comedy”.
Canberra Times

Since training at The John Bolton Theatre school and the VCA he has concentrated on creating new work. Most recently this has included “Sugar”, a clown piece performed at La Mama 2002, “Russian Soup” (Inotrope Productions)-first performed in 2002 and a solo piece “Champagne” based on a Chekhov short story at 45Downstairs in 2004.

Graduated from V.C.A. in 1994 and has since performed with S.T.C., M.T.C., Playbox, S.T.S.A. and many others. He’s worked with N.Y.I.D. for over nine years. His T.V. appearances include “Sea Change” “Stingers” “Blue Heelers” & “Neighbours” etc. He has begun directing and teaching acting at the turn of this century, and founded Shmutzky in 2004. His most recent work was co-directing and acting in “The Room” by R.Cortese.

Currently Head of Acting at VCA School of Drama.

Most recently directed I don’t wanna play house with Tammy Anderson and Hamlet for Short attention Span.  Over the last 20 years he has continued to perform his celebrated solo show Jumping Mouse as well as the more recent  Shadows and light and The God Show.

Phil Carroll
Phil has been involved in World Music for many years with a specific interest in middle-eastern music. He  studied oriental music in Turkey, Egypt and Morrocco, specifically the ney (the mid-east flute) , the quartertone accordion and the  zurna (mid-east oboe).  He leads the 6-piece middle-eastern music and dance ensemble Yalla! , having produced a CD and  played extensively at festivals  around Australia.

is a violinist and half of the Russian Soup musicians, BOHEMIAN NIGHTS with accordionist Phil Carroll. The duo recently toured New Zealand for the 3rd time, has recorded a debut CD to be launched October 22nd at the Boite, and plays klezmer, gypsy, russian, tango, middle-eastern, italian, french, jazz and more. They are also part of larger bands KLEZMERITIS, YALLA! and FLIRTING MAZURKAS.
Ernie specialises in klezmer and studied in New York, Budapest, Cracow and San Fransisco. He leads KLEZMERITIS which plays East European klezmer, and in concerts and CDs fuses it with jazz and middle-eastern sounds, and teaches klezmer.

He is also a member of Melbourne PLAYBACK Theatre Company as an improvising musician, and JUGULARITY comedy jazz cabaret band  which for 17 years plays festivals regularly, has a 4th CD on the way.
For more on Ernie's music and a gig guide and discography, see www.erniegruner.com

Go back to Kaleidoscope Music